What do you think is the most beloved food on the planet? Burgers? Sushi? Pasta? Personally, I think it’s pizza. With a tasty sauce, a generous helping of cheese, and an infinite number of topping combinations, how could it not be?

When it comes to pizza, the words “crowd-pleaser” come to mind. There are just so many options to choose from, so everyone is sure to find something they like. 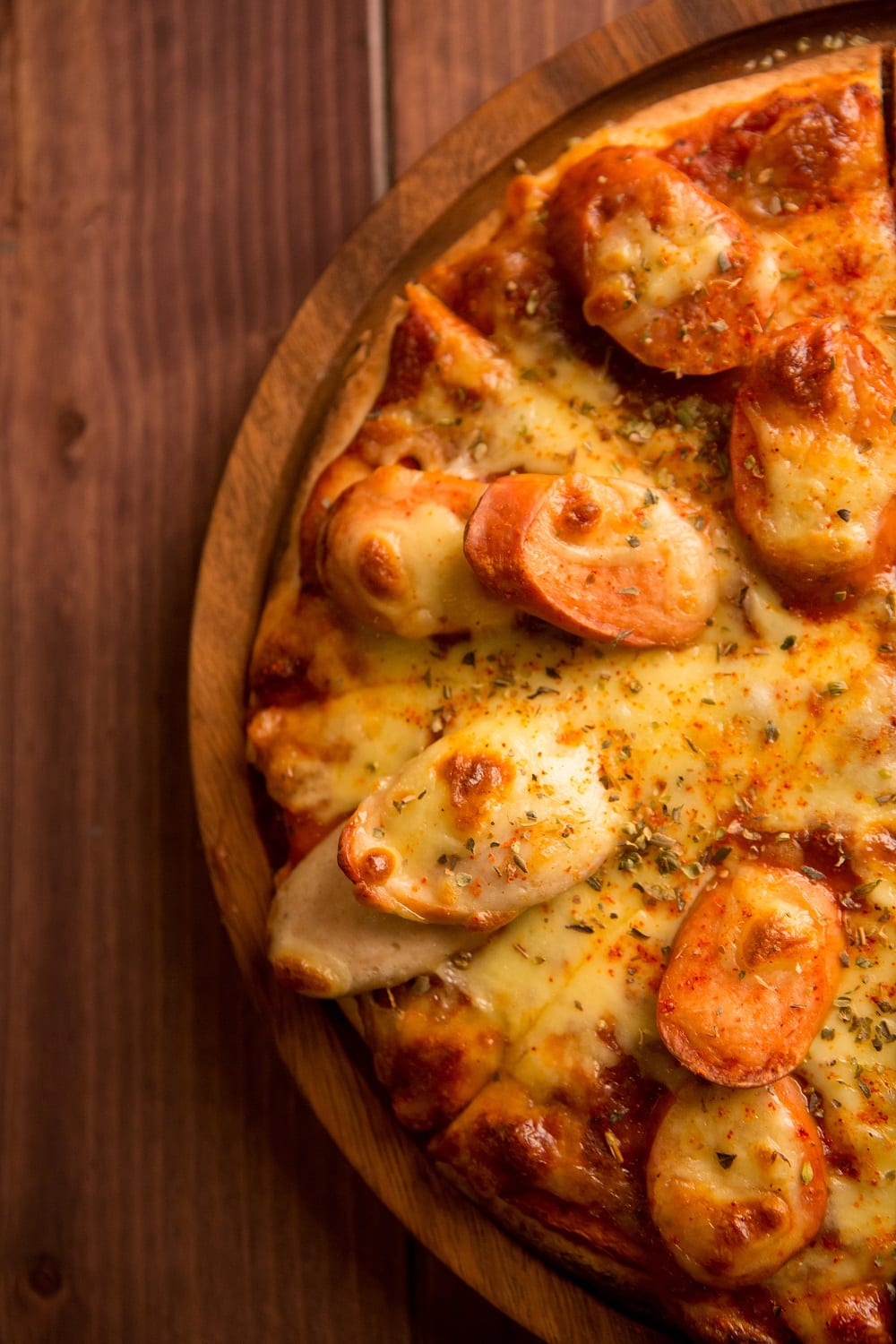 Do you prefer thin or thick crust? Veggie or meat toppings? Are you a fan of pineapple? Today we talk about all things pizza, but more specifically, the Brooklyn pizza.

How pizza came to the United States

Before we delve into Brooklyn pizza, we should first understand how pizza came to be in the United States. How did this iconic food group arrive and develop?

Originating in Italy, pizza first came to the United States in the early 20th century with the arrival of Italian immigrants. In 1905, the first documented pizzeria in America was launched.

It was opened in New York City by Gennaro Lombardi and, since then, pizza has become one of the most widely consumed foods in the country. A reported 3 billion pizzas are consumed each year in the US. 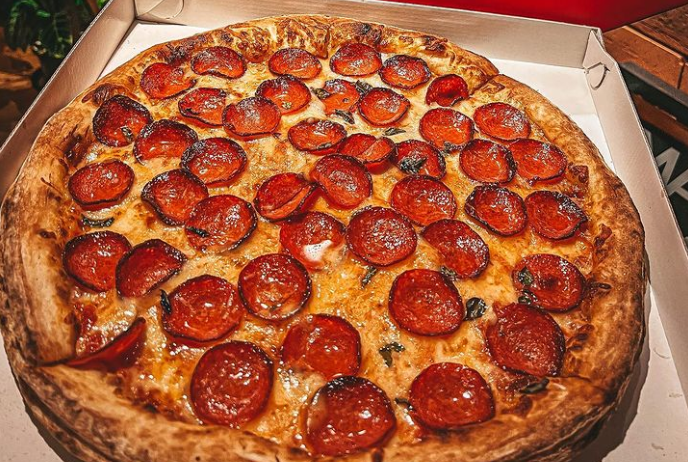 New York is believed by many to be the starting point of Americanised pizza. Therefore, it can logically be presumed that Brooklyn-style pizza emerged as a subtype of New York-style pizza.

Let’s start by looking at the basic structure of Brooklyn-style pizza. Typically, it has a thin crust and a moderate amount of tomato sauce (marinara). Its delicate crust is hand-tossed which gives it a lighter and crunchier texture compared to other pizzas.

Brooklyn-style pizza is also traditionally cooked in coal or wood-based ovens which gives it a slightly charred flavor that many like. 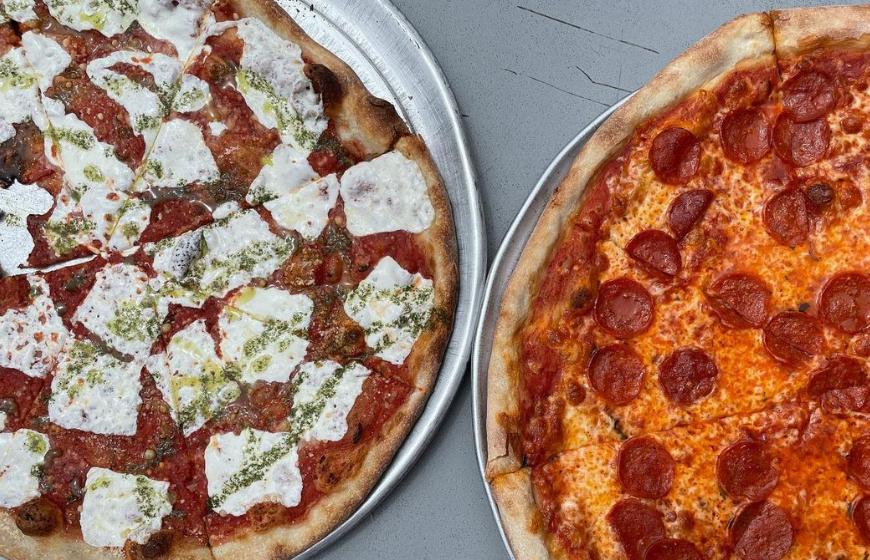 Most Brooklyn-style pizzas are not particularly fancy or intricate when it comes to their toppings. To start, a thick and savory red tomato sauce is a must—one that contains onions, garlic, and an appropriate amount of herbs. Oregano and basil are staples in obtaining an authentic-tasting pizza.

Next, the cheese. This is the part many people would consider to be the most important. The cheese of choice for Brooklyn-style pizzas is mozzarella.

It is a light white cheese traditionally crafted from buffalo milk, though there are cow, sheep, and goat variations as well.

Pepperoni is also considered by some to be a chief ingredient of Brooklyn-style pizza. It gives a nice punch of saltiness that pairs perfectly with the tangy flavors of the marinara. 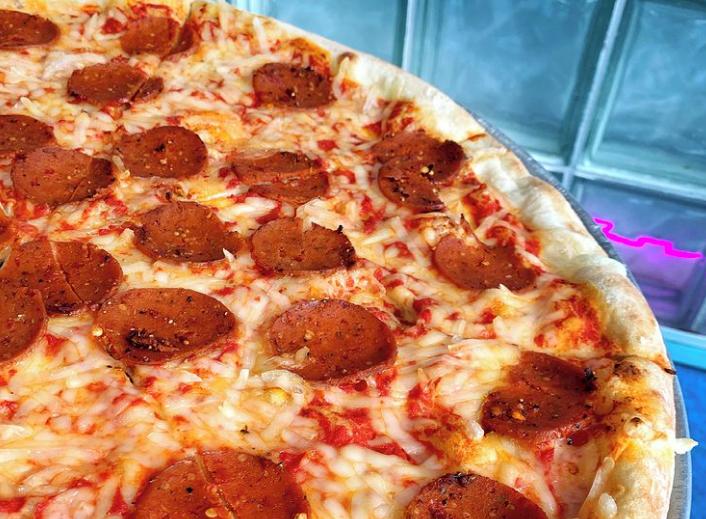 This is to prevent the pizza layers from falling apart because the crust is so thin. A regular triangle slice would be longer and harder to keep intact—some pizza chains (such as Dominos) still offer them though.

In addition, Brooklyn-style pizza is meant to be eaten folded up. Eating it this way helps ensure each mouthful contains an even distribution of cheese, crust, and sauce.

You don’t have to feel pressured though—eat it in the way that you would most enjoy it! 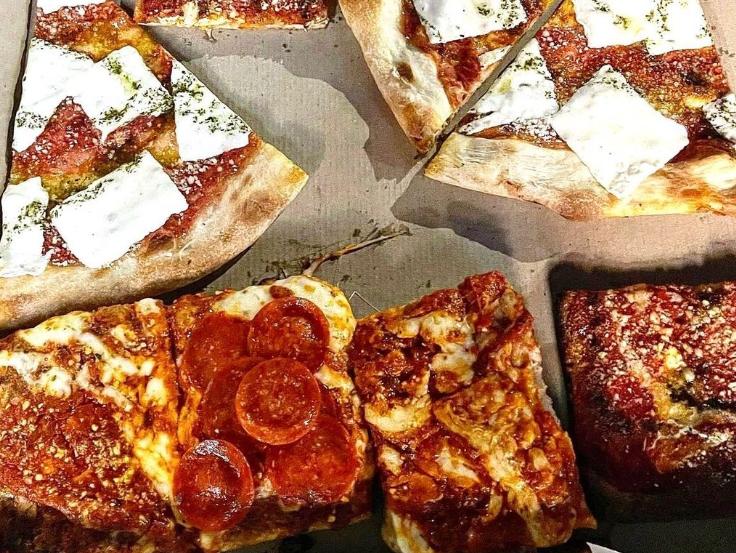 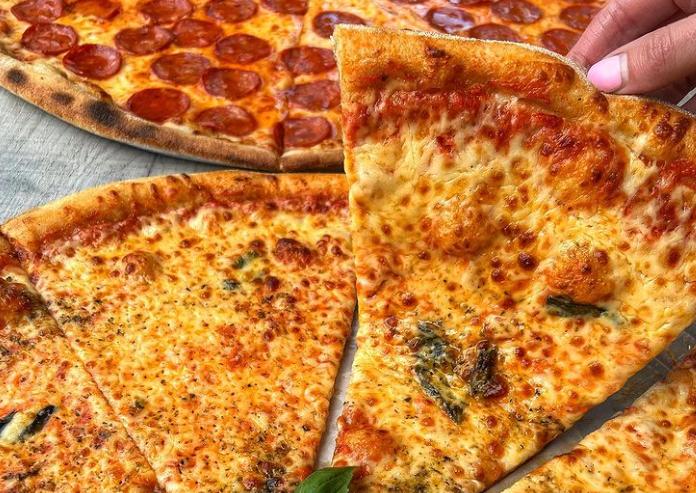 Who did it first?

There is some debate as to who introduced the Brooklyn-style pizza to America first. Totonno’s, a pizzeria located on Neptune Avenue in Brooklyn, claims to be the pioneer of this popular pizza style. They have been serving coal-oven pizza to Coney Island since 1924.

On the other hand, some believe that Domino’s Pizza was the first to coin the Brooklyn-style pizza in 2006. This is when they started offering pizzas with thinner crusts topped with “Brooklyn-style pepperoni”.

Domino’s currently features five types of crusts: hand-tossed, handmade, crunchy thin, Brooklyn-style, and gluten-free. They describe their Brooklyn-style crust as one that is good for big crowds.

In terms of what gives this special crust its crunchy texture—cornmeal. 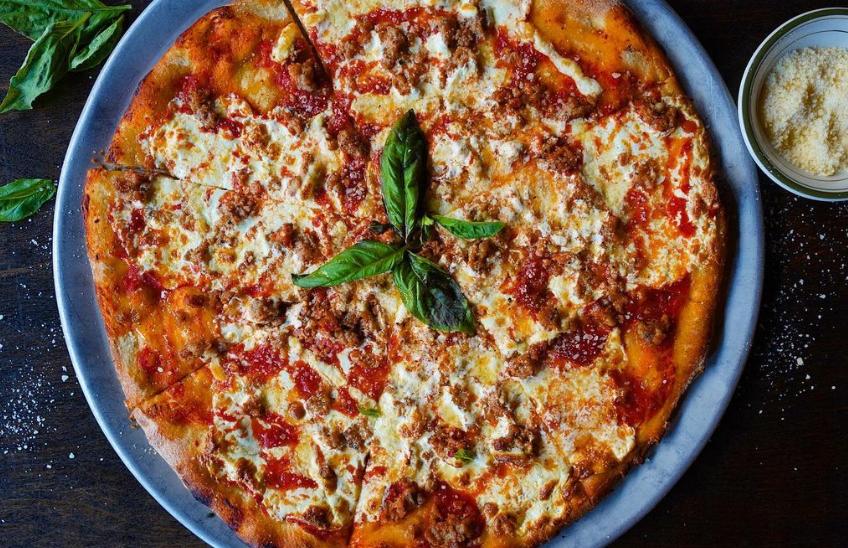 Where to Find Brooklyn-Style Pizza

So where can you find the best Brooklyn-style slice? Here are some of our recommendations. Be sure to check them all out and decide on who you think is the ultimate winner!

Grimaldi’s first location opened under the Brooklyn Bridge in 1990. They are a family-run business that has expanded to over 10 locations country-wide and they are proud to share that their pizzas are baked in a coal-fired brick oven. This cooking method gives their pizzas and delicious calzones a unique flavor and crispy texture that cannot be achieved with a gas or convection oven.

Their mozzarella is handmade, and their “secret recipe” dough recipe is also made daily for optimum freshness. You can click here to look for the closest Grimaldi’s Pizza near you. 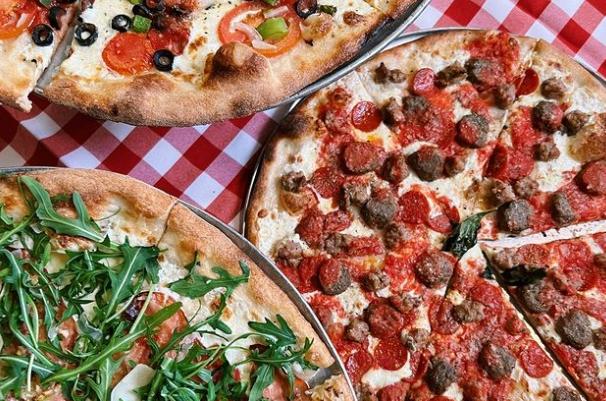 Dating back to 1933, Patsy’s Pizzeria has a history that is almost 90 years old! They first opened in New York City and quickly made a name for themselves by providing deep Brooklyn flavors.

If you take a look at their menu here, you will notice that their pizzas are simplistic and traditional. With an original pizza pie made of a thin crust, house-made tomato sauce, and fresh mozzarella, you cannot go wrong if authenticity is what you’re looking for.

As of last month, there are approximately 15 locations, and they are still growing! Along with pizza, they also offer other mouth-watering dishes such as eggplant parmigiana, rigatoni Alla Norma, and homemade lasagna. 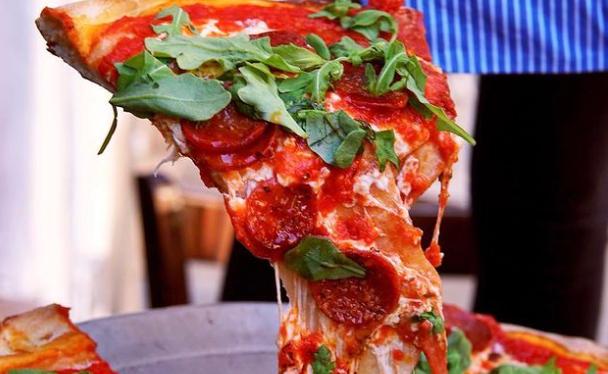 But do not let that deter you, their Grand Street location has over 1000 reviews and they boast an impressive 4.4 out of 5-star rating. Their Instagram page also has more than 102,000 followers.

There are some clear fan favorites on their menu, but they also have some innovative creations that are worth giving a try.

For a more traditional taste, you can always go with their classic red sauce and mozzarella pizza. As a bonus, all of their pizzas can also be gluten-free using CUP4CUP GF flour. 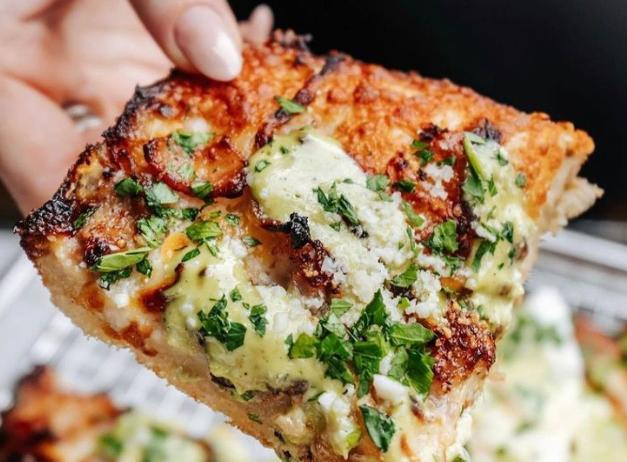 Barboncino Pizza was opened by chef Ron Brown who has been in the food business since 1984. He is a pizza enthusiast who spent six summers in Italy to learn about wood-burning ovens and pizza-making styles. He even imported his oven from an Italian company!

There is only one location found at 781 Franklin Avenue in Brooklyn and they are open every day from 11 AM to 11 PM. On Google, they are rated 4.6 out of 5 stars and many have commented on how this is a go-to place for old-style pizza.

There is a great atmosphere and friendly service as well. As an appetizer, their Neapolitan meatballs are fantastic (made with organic Italian tomatoes, Parmigiano Reggiano, and parsley) and, of course, their marinara pizza comes highly recommended. 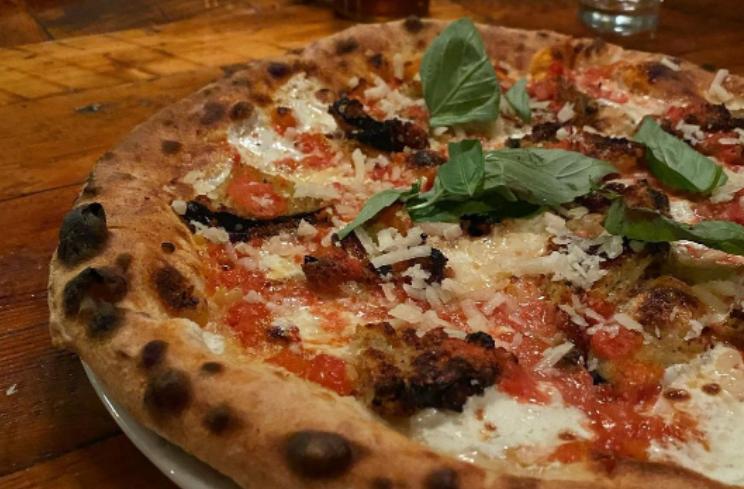 Found on Moore Street in Brooklyn, Roberta’s is a New American pizzeria that is known for its hipster vibe and wood oven-cooked pizza.

If you love open spaces, they have a sunny rooftop garden that is great for catching up with friends and enjoying some beautiful weather.

In their menu, you will find seasonal ingredients that are sourced locally. Many of their meats are also cured in-house with traditional techniques that have been passed down through the generations.

Their desserts are made in-house and their wine list is worth taking the time to explore.

What are their most popular dishes? Their Bee Sting Pizza is a crowd favorite, featuring tomato, mozzarella, soppressata, basil, chili, and honey. There are also many fans of their Margherita pizza and their sticky toffee pudding. 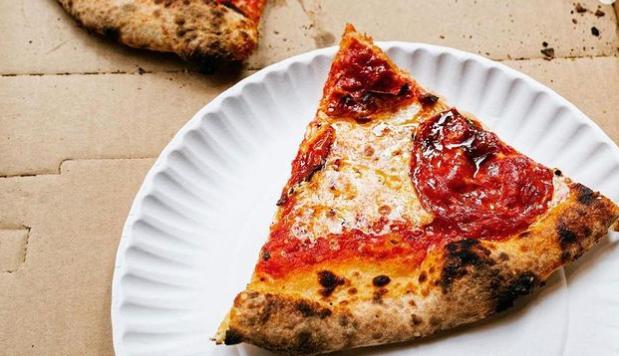 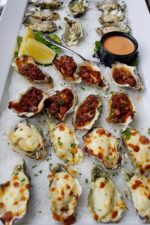 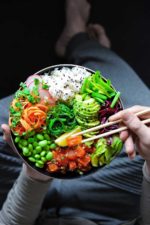 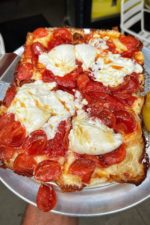