Countless people have made the grave mistake of thinking bartending would be the best option for them just because they could mix a couple of drinks and make conversation.

Some even thought it would be an easy way to make a quick buck in addition to their other career pursuits.

Let‘s have a moment of silence for them. 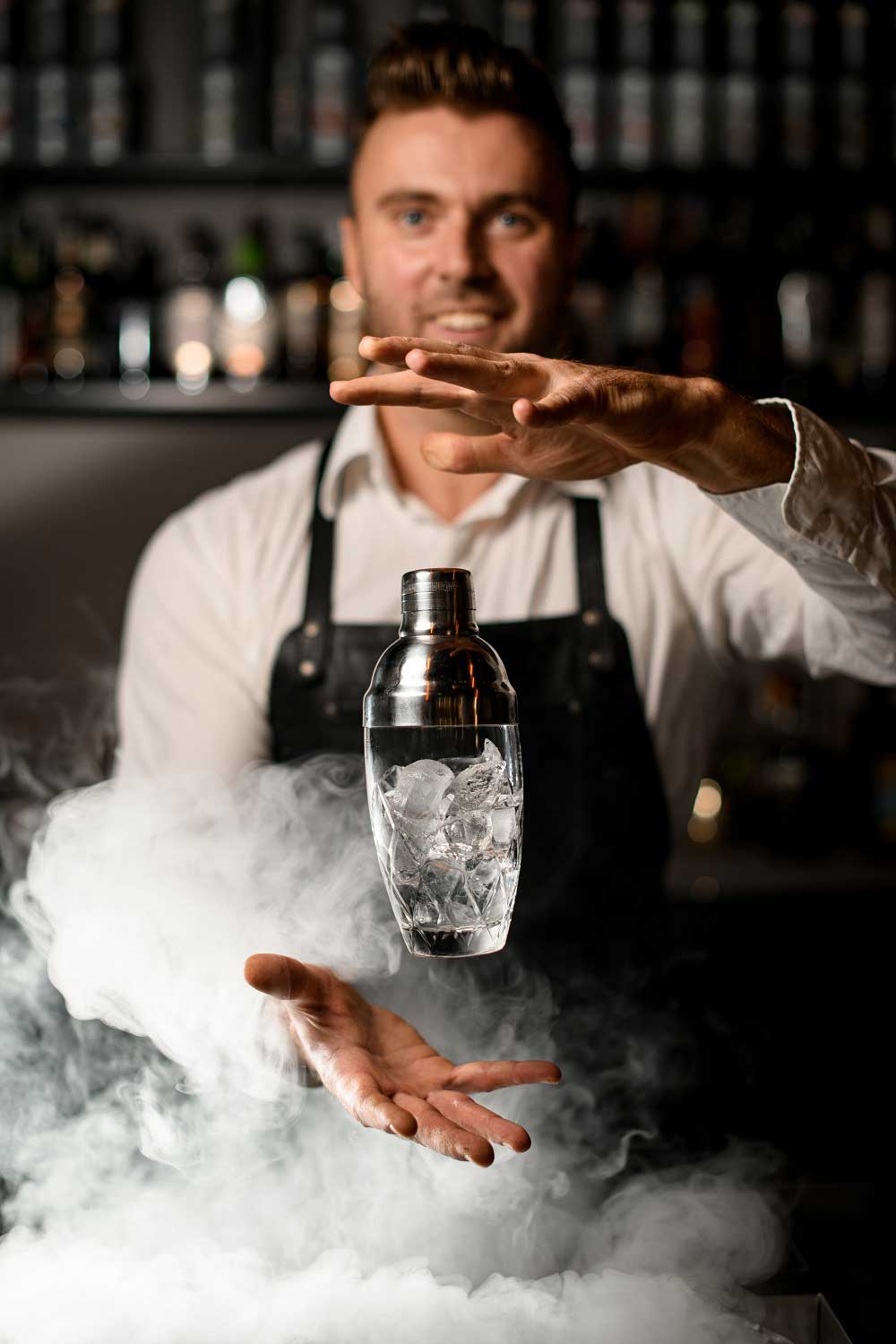 But the most misguided of all were those that thought being a bartender in New York City was anything less than an extreme sport. They learned the hard way what I’m about to tell you for free.

In this post, I’ll take you through the real gist of what bartending in New York City is like, what it takes to get your foot in the door, and whether you should reconsider being a bartender in NYC altogether.

Anyone Can Be A Bartender 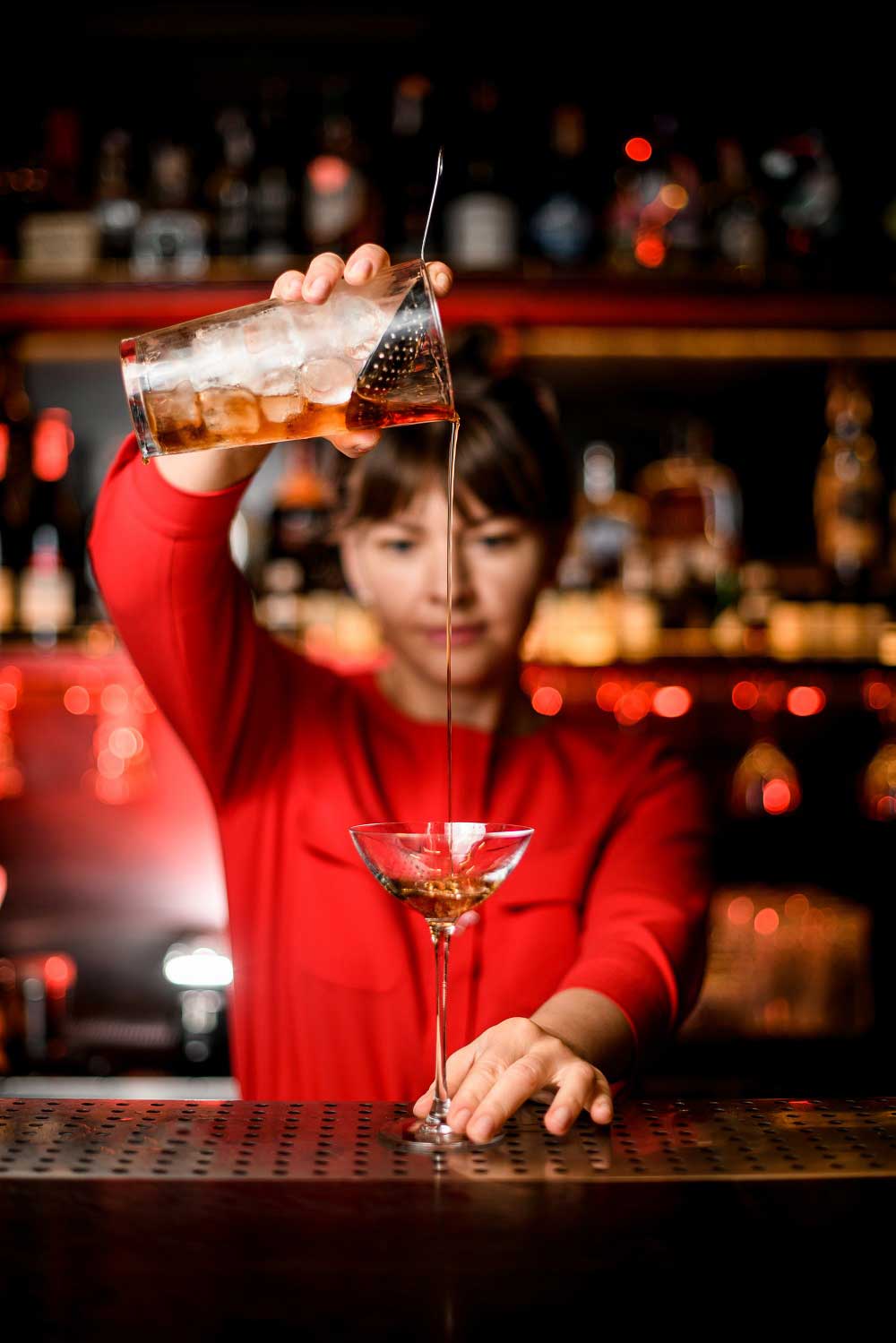 There’s a common misconception that any Tom, Dick, and Harry can be a bartender. To customers, bartenders look like people who only pour drinks in a glass. Not much intellect is required for that, right? Wrong.

Bartending is physically and mentally demanding. Asides from having to stand for hours all while maintaining a bubbly and friendly demeanor, bartenders have to keep track of several orders and the customers they belong to. All this while some customers try and make distracting small talk(which brings us to our next misconception). 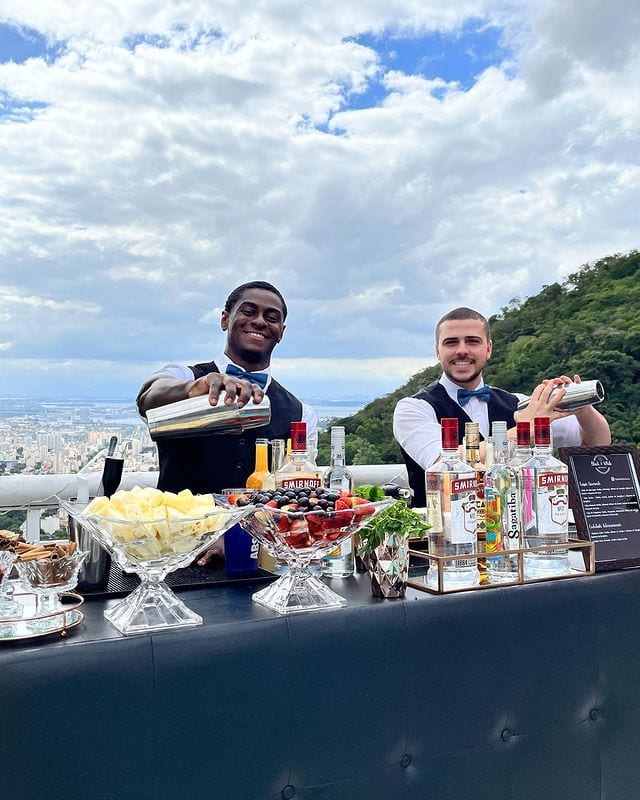 I’m not saying that bartenders are secretly loners that don’t want to talk to you, but the reality is that making conversation for hours is part of their job. Even the most social bartenders don’t necessarily want to converse with strangers for hours every night.

Bartenders will most likely be fun, humorous, chatty people on a regular day, but on a busy night with many orders, they would probably like to focus on the job. But if it’s a slow day at the bar, by all means, strike up a conversation. 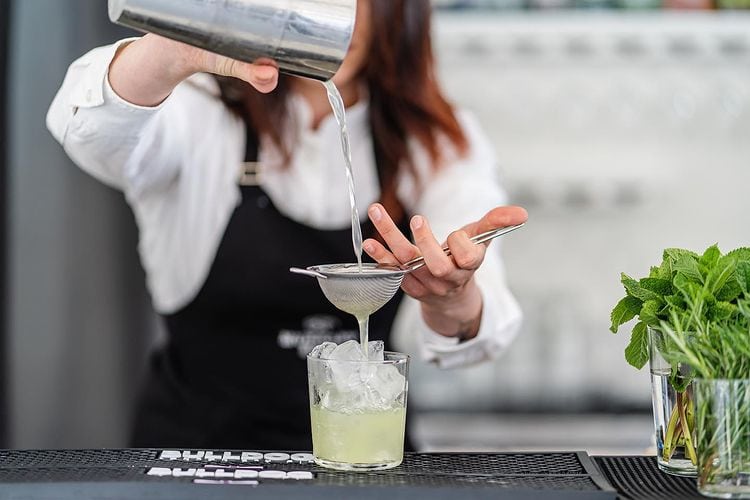 This is one of the most common misconceptions out there. How many kids do you hear aiming to be bartenders in life? Not many. But that doesn’t make it any less of a viable, respectable career.

Many bartenders bartend as a full-time job, and they’re happy doing it. It can be financially rewarding, with some bartenders earning up to 6 figures like in a white-collar job.

There are bartending schools one could attend and certificates and licenses to be earned.

There is also room for career growth. You could become a manager, a consultant, a freelance bartender, or even own your bar someday. The point is bartending is as much a career as any other, with its up and downs.

Bartenders Must Go To Bartending Schools 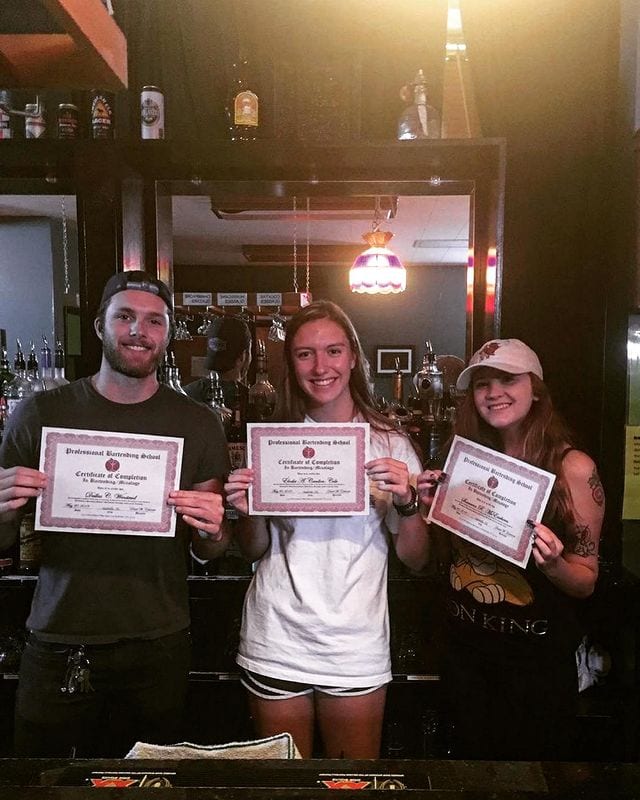 It is not compulsory to attend a bartending school, but is it necessary? Most established bartenders would probably tell you it is not. As with many other job types, experience trumps education, and in a city like New York, experience is everything.

Bartending schools can be helpful if you’re entirely new to the profession and would like a quick guide to how it all works (if you have the money), but most bartenders don’t attend bartending schools.

Being A New York Bartender: What to expect 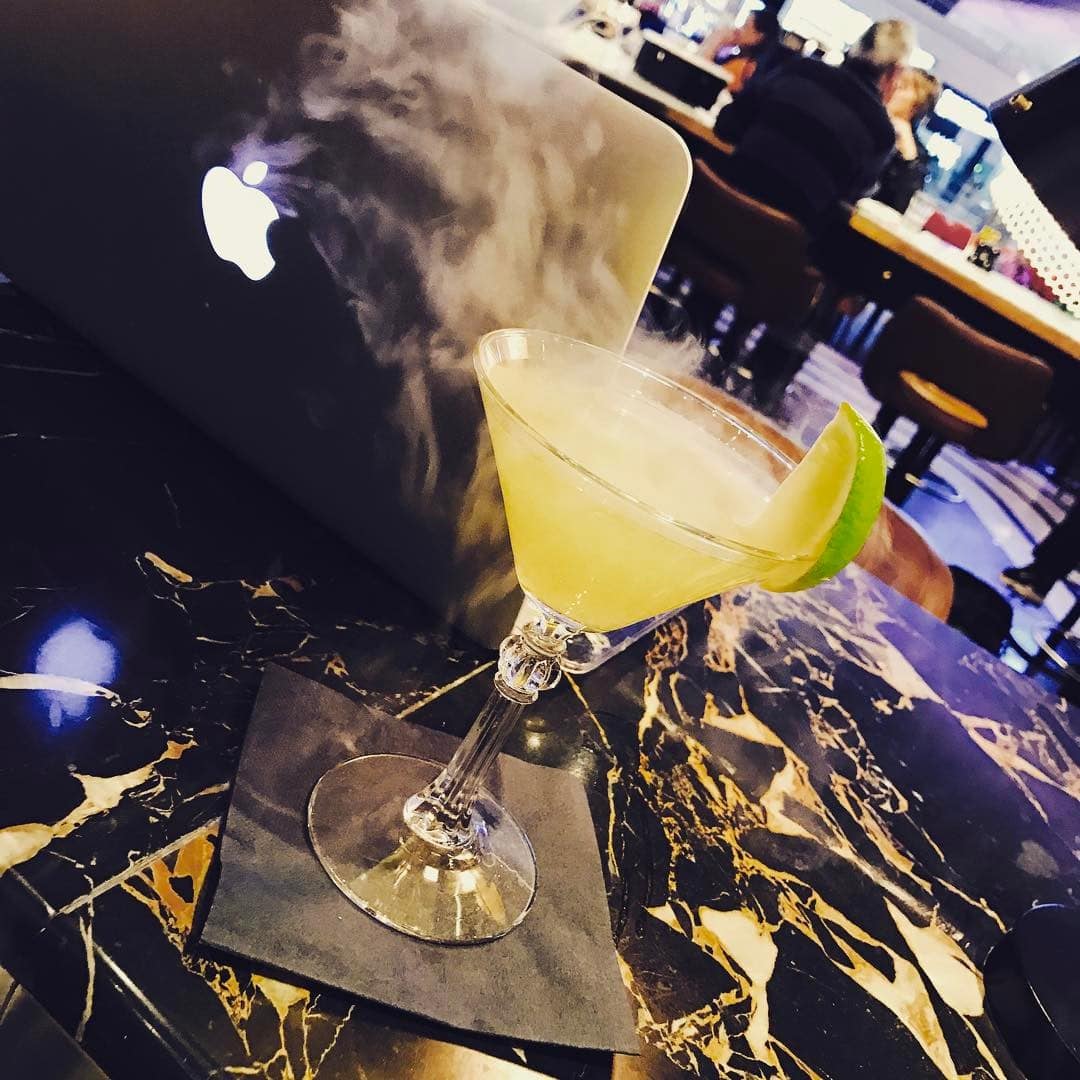 To experience being a New York bartender, you have to bartend. But getting the opportunity to do just that is pretty hard. New York is one of the most competitive cities for bartending.

They don’t just hand out bartending jobs cause you think you’ll be a good fit. Even worse, this is one of those rare situations where experience might not be that much help either, depending on the experience.

You could have seven years of bartending experience anywhere other than New York City, and it wouldn’t be worth a thing in New York. This is because most bars are looking for bartenders strictly with New York experience.

So you could have made it big elsewhere only to spend a year applying to jobs and only land a part-time gig or return to the level of barback in New York. The job hunt in New York would require patience.

In reality, it might take several rejections and disappointments before you can land a bartending job in New York. Keep in mind that New York is an expensive city to live in.

If you have nothing else to fall back on and you’re hoping to land a job ASAP, maybe a bartending job should not be your only option.

However, if you have some experience bartending in New York or have a passion for it, it is only a matter of time. As hard as it may be, if you keep at it, you will eventually get a job.

Many New York bars have bartenders working up to 10-hour shifts ending as late as 4 am.

Are you ready for that?

These shifts hardly come with lunch or bathroom breaks, and you’ll have to be on your feet 99.9% of the time. It’s not for the faint of heart or low blood sugar.

You’ll often hear bartenders tell stories of how all they had to eat for 10 hours of standing was two olives, an orange slice, and a martini. In other words, get ready to lose weight (at least initially).

The hours will also take a toll on your relationships. While your roommates, friends, or significant others would be up and about during the earlier hours of the day, you’d be lucky to wake up earlier than noon.

It could be tough to maintain relationships with people outside of your workplace.

On the other hand, if you already live a nocturnal life, this could be right up your alley.

Working as a bartender means possibly being around drunk people who are not in their right minds. You’re bound to see things. You’ll see countless fights and probably have to break up your fair share.

You’ll see lots and lots of vomit which you might end up cleaning, and if you’re unlucky, you might see some body parts leave their owners. That’s not a sight you’d want to be stuck in your head.

To be a New York City bartender, you’ll need thick skin. You’ll need to know how to separate your general view of people and the world from what you see at the bar, which can get overwhelming.

You’ll hear secrets you can’t share and learn some information you wish you didn’t. It could be a real culture shock if that’s your introduction into the real world.

You won’t find 1-year vomit cleaning experience or a breaking-up-fights certificate on anyone’s list of bartending requirements. But it comes with the job. Sometimes you’ll have to fill in for other staff that is late or absent and find yourself doing more than just shaking and serving drinks.

There’s no way to prepare for what other responsibilities you might have to take on in a bartending job, but you’ll need to be flexible.

Working in the service industry is often looked down on or assumed to be the kind of thing you do because you have no other choice.

Even though bartending in New York City is more widely regarded as a respectable, well-paying job, there will still be people who mistreat. Really badly.

Again, you’ll deal with highly intoxicated people who aren’t known for making the best decisions. You could get treated poorly, picked on, hit on, spit on, and so on. But you might meet some cool people and generous tippers that make your night and make it all worth it.

On the brighter side, the kind of bar you work for will also play a role in the size of your tips and the kind of treatment you receive. Some bartenders are highly respected and make serious cash where they are.

But getting to that level and landing those kinds of gigs takes either knowing someone or spending several years being good at what you do.

The Money (How much do NYC bartenders make)

Bartenders make a lot of their money from tips, and luckily, there are many wealthy people in New York City. You can earn up to $250 from tips and way more on really good nights. This depends on the kind of bar you work for, but generally, the pay can be very rewarding.

One thing to consider is the expenses you’ll have to cover. We’ve already established that New York City is expensive, so you’ll have to decide what pay range is worth it to survive versus what you’re likely to make steadily.

Last but not least, you’ll have to decide if the money is worth everything you’ll have to go through. The long hours, the crazy experiences, and possible poor treatment might be less bearable without substantial financial motivation. 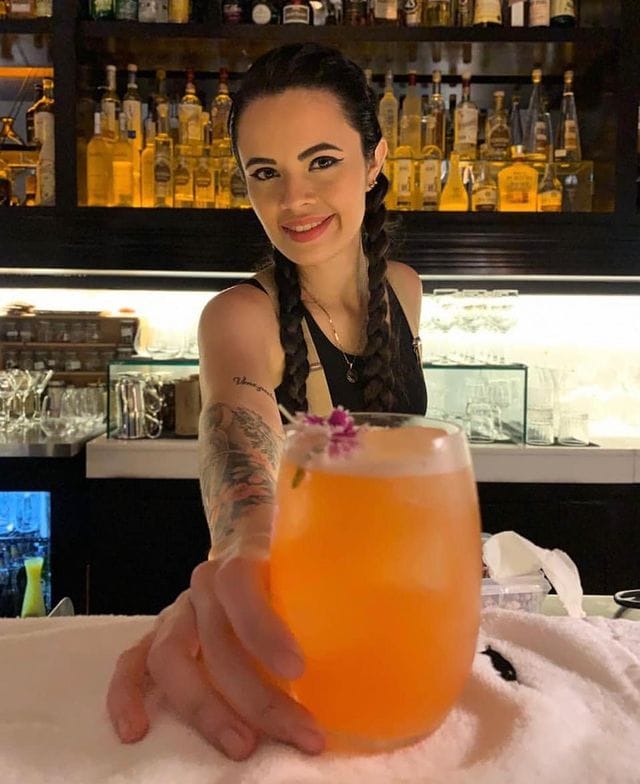 Start As A Barback

You’re likely to hear this advice more than any other. That’s what most bartenders did, and that’s what they’ll tell you too. A barback is like a bartender’s assistant. They handle cleaning, restocking, and other tasks aside from and serving drinks. It doesn’t require much skill.

If you start as a barback, you’ll get to hang around the bartender long enough to learn the basics. Sometimes you might be allowed to stand in for the bartender and eventually, you could get promoted to being a bartender yourself.

Serve In A Restaurant

Try going to several restaurants to ask to work as a server. When you get in, work a while and try to be well-liked. After a while, you could ask to learn some bartending and sometimes work with the bartender. Bars at restaurants aren’t as fast-paced and crazy. This would give you a tamer introduction to the New York bartending scene.

Go To A Bartending School

While many people believe bartending schools are a waste of money, they’re still a good way to get your foot in the door. If you know nothing and no one, and you can afford it, why not?

You never know, you just might make a connection or get a mentor that would hook you up with a great job. However, attending bartending school cannot replace the actual bartending experience.

One of the easiest things to start with is following popular bartenders on social media. You can learn recipes, tips, and style from the comfort of your home and practice on your own. But don’t get too comfortable with this. Remember, you need actual, first-hand experience.

Bartending Licenses And How To Get One 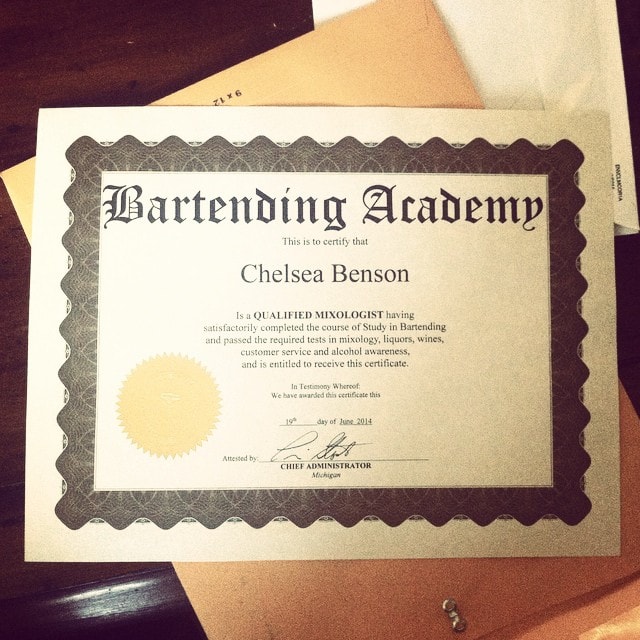 How to get a bartending license

Do you need a bartending license in NY

Bartending licenses are not compulsory for bartenders in New York. But if you’re interested in getting one here’s all you need to know. 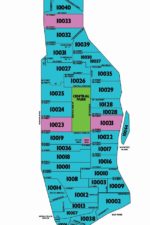 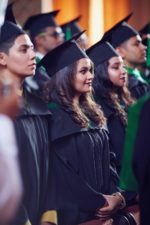 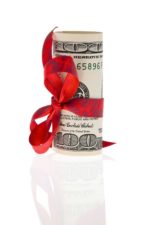