Getting a view of New York City from high up is sure to be on any tourist’s to-do list when visiting. But you can see NYC skyline from so many places now – bridges, such as Brooklyn Bridge, apartment buildings, tramways, such as Roosevelt Island Tramway, museums, and even the Statue of Liberty.

However, you cannot beat the view and the experience of buildings built to enjoy those views – Observation decks.

There are a couple of observation decks to choose from with similar views to experience. So, if you only had the chance to visit one, which would it be?

The answer will depend on the kind of experience you hope to have.

To help you make up your mind, we will be comparing 3 of the popular observation decks in New York: Summit one Vanderbilt, Empire State building, and Top of the Rock. 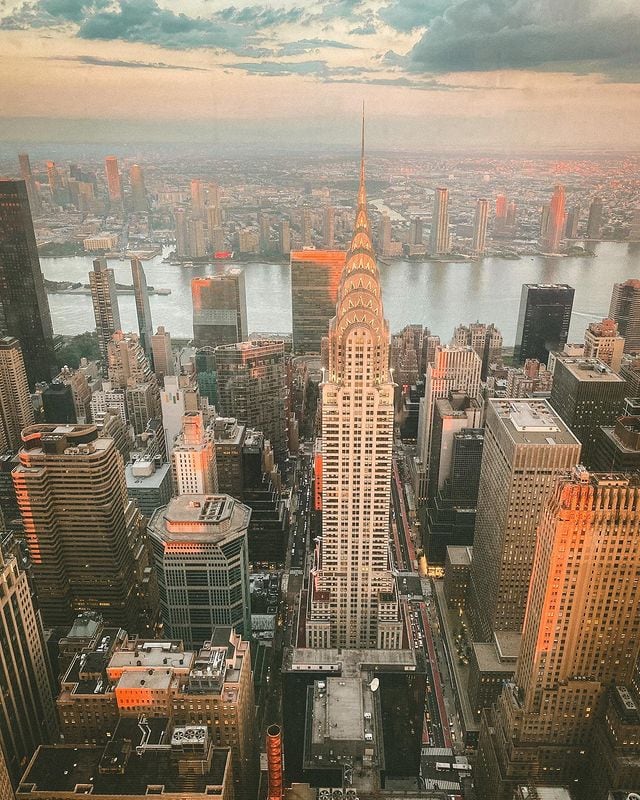 Summit One Vanderbilt is the latest addition to New York City’s observation decks. It sits on top of One Vanderbilt, which is the 4th tallest building in New York.

With all the observation decks that have come before it, One Vanderbilt makes sure to bring a new spin to the experience of viewing New York.

Summit One Vanderbilt occupies the last few floors of the One Vanderbilt building, covering 6038 square meters. The Summit doubles as an observation deck and an immersive digital art experience.

You can enter One Vanderbilt from the Vanderbilt passage on the main level of Grand Central Terminal. After which, you’ll find the entrance line to the observation deck.

Next, you’ll go through security, watch a short movie (optional), be given shoe covers and sunglasses, and you’re on your way up in the elevator. 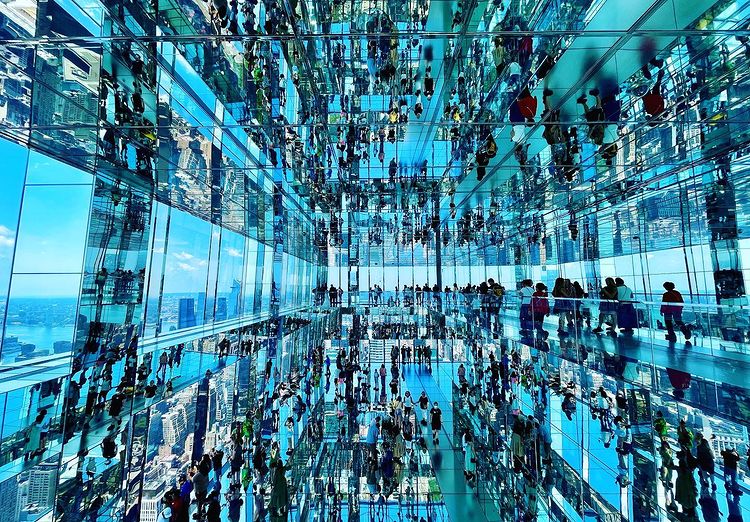 An infinity mirror room gives the trippy feeling of endless space. But don’t forget to look out the windows to see a beautiful view of the Chrysler building. The room also reflects the weather and looks different with each visit. 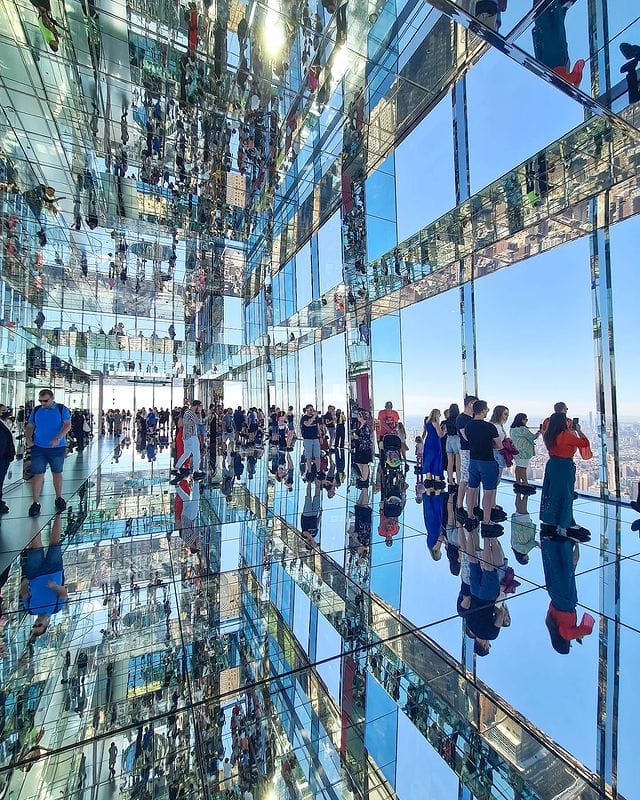 A room with mirrored balloons 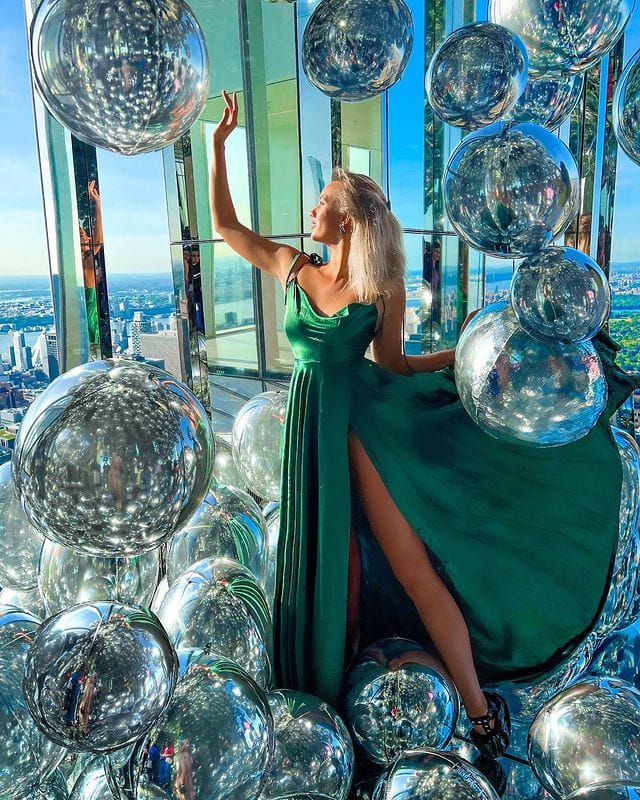 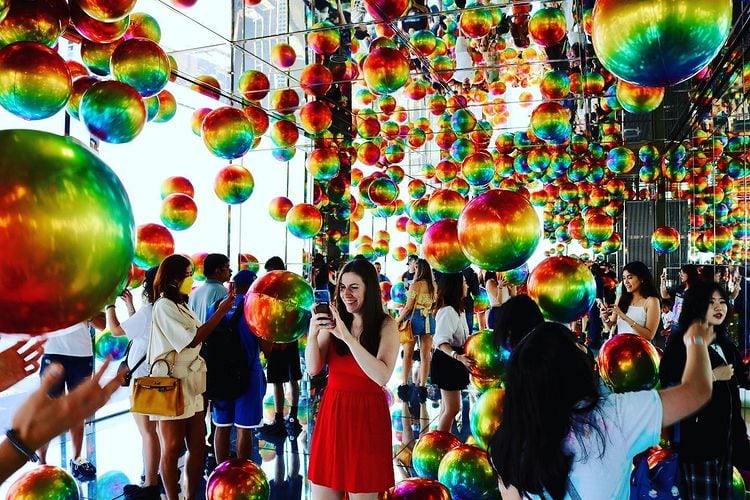 Look through the portals to see the levels below. 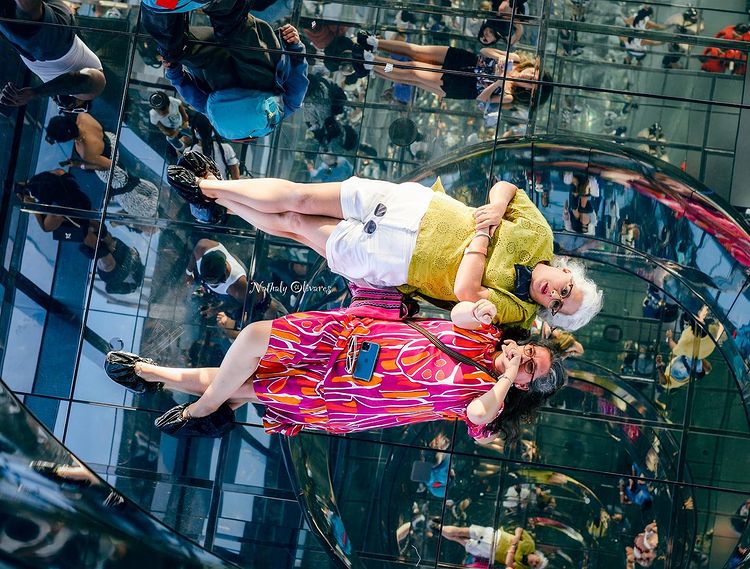 Step into one of the two glass boxes hovering over Madison Avenue. This attraction imitates the feeling of levitating over the streets at 1063 feet. If you were freaking out in previous rooms, this attraction might not be for you.

But if you’re brave enough to step into the glass box, Summit staff will be on standby to document your bravery with a picture. 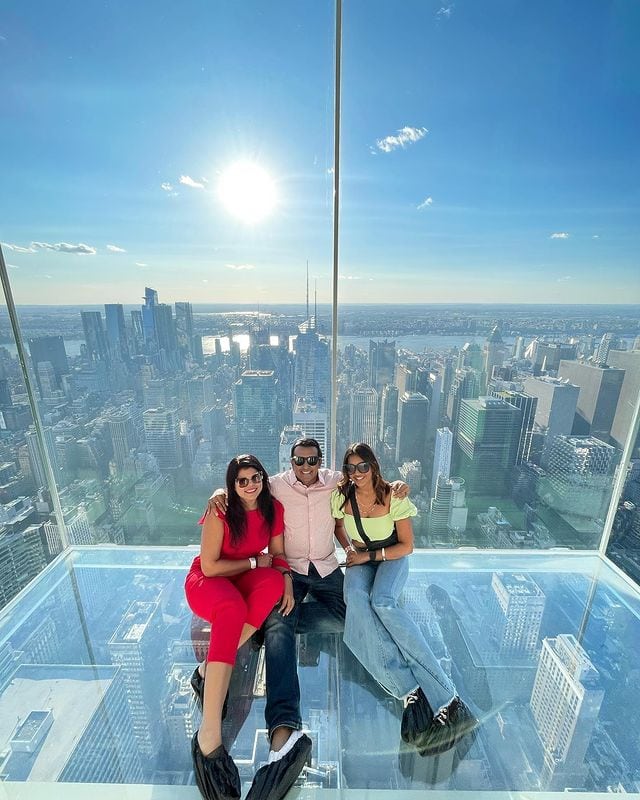 This ride in a glass elevator takes you to the highest point visitable on the building and then to a gift shop for souvenirs. Here you can collect all your pictures (not for free). 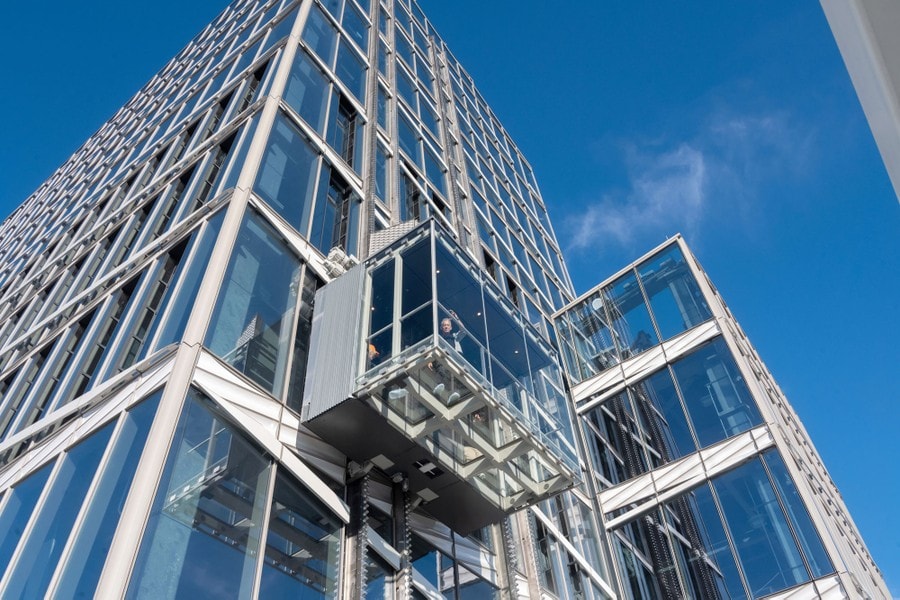 A lounge/bar where you can chill, eat and drink. 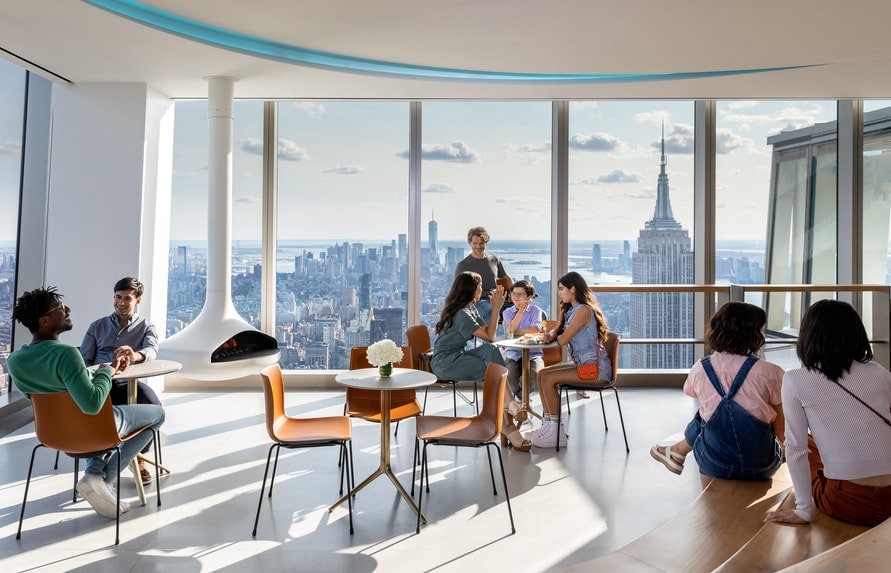 The less talked about outdoor terrace may be less trippy and exciting than the rest of the observation deck, but it is perfect for sitting and soaking up the view (other rooms don’t have a place to sit). 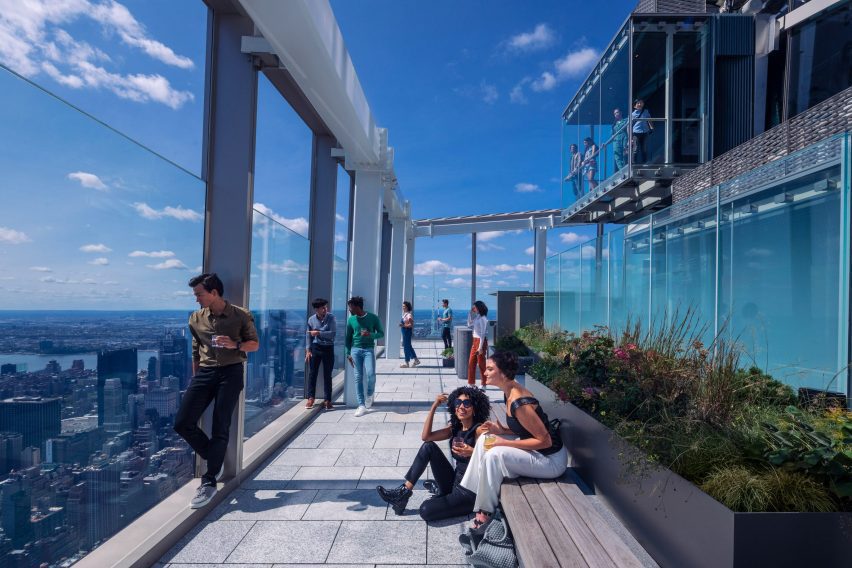 Best time to visit: Early morning or just before sunset.

What’s below the observation deck: One Vanderbilt office space.

Cons Some rooms can be overwhelming, especially if you have vertigo. 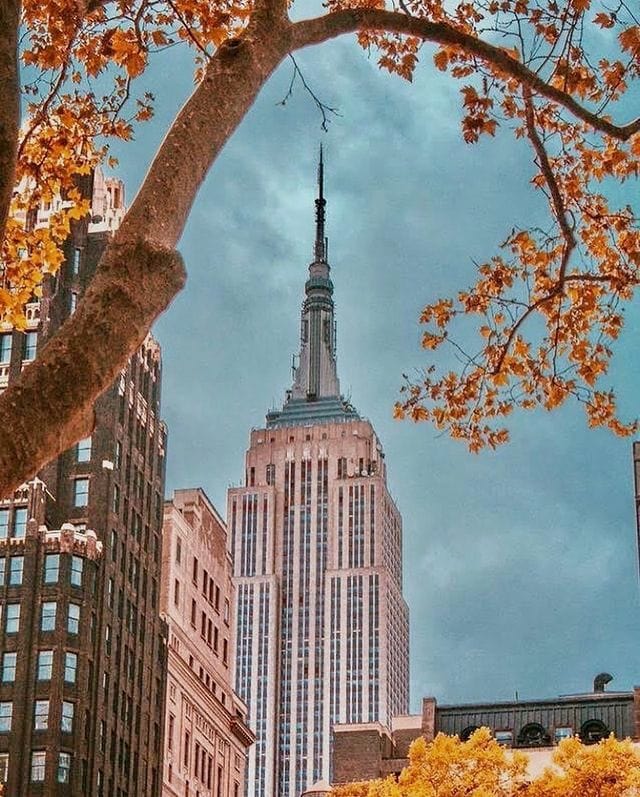 The Empire State building has the oldest observation deck in New York. It has been a New York City favorite since its construction in 1931, reaching a height of 1,250 feet. Did you know the Empire State Building was the first-story building with over 100 floors in the world? Now you do.

The Empire State Building is a 102-story Art Deco skyscraper in Midtown Manhattan, New York City. It was designed by Shreve, Lamb, and Harmon, to be an office building but has since become one of New York City’s most iconic sights.

The observation deck offers a view of nearly all of Manhattan Island, plus 2/3rds across the Hudson to New Jersey.

You can also visit one of the restaurants or shops on the lower levels of the building. The gift shop is especially worth a visit so you can take part of your experience back with you.

Want more about Empire State building? Check out the guide.

Relive the classic 1933 movie – King Kong by taking a picture in the hands of Kong himself! 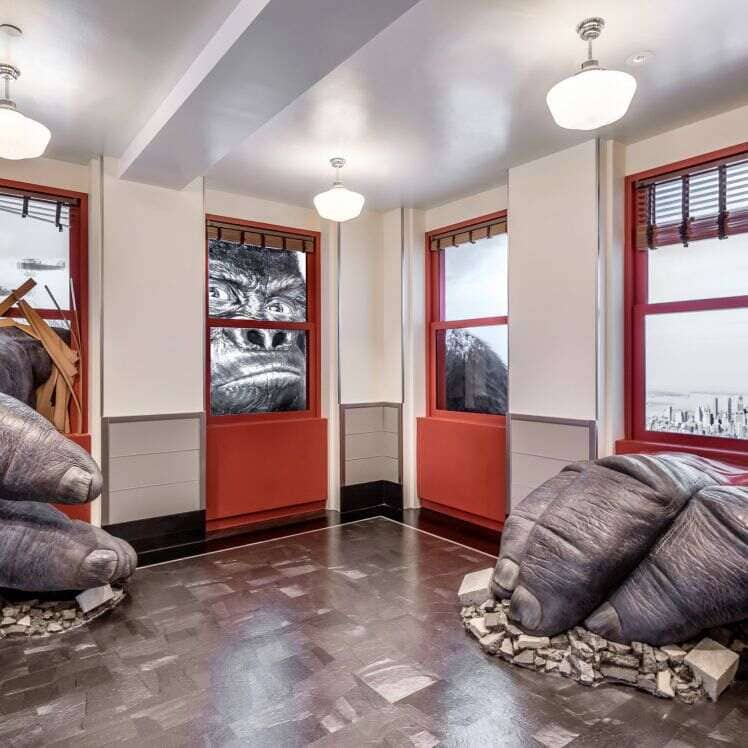 Get an immersive look at all the movies, commercials, TV shows, games, and comics featuring the Empire State Building. There are over 600 clips available in this surround-sound theatre. 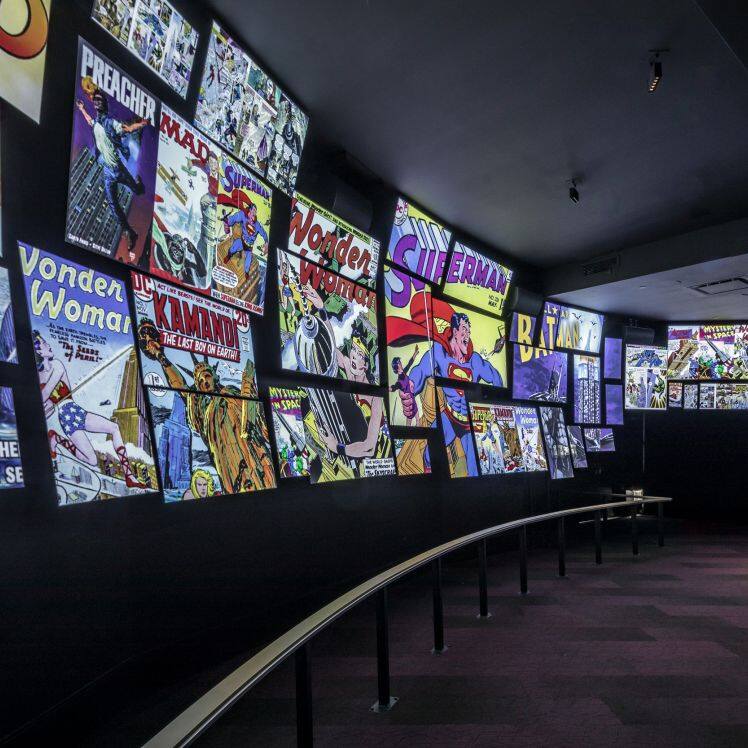 They weren’t kidding when they said this was the world’s most famous building. If the crowd and the movie clips don’t prove it to you, maybe the celebrity exhibit will. Find out which of your favorite celebrities have stood right where you’ll stand. 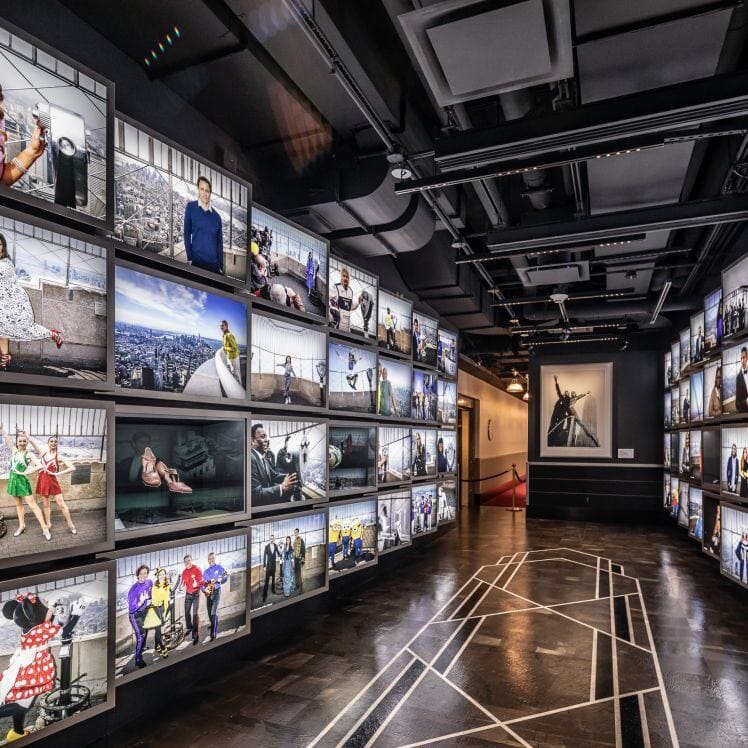 Take a walk through history at these exhibits. You get a look at the site of the building before it was built, its construction, and its opening day. The Exhibits feature black and white imagery, bronze sculptures, and copper models of the Empire State building at different stages. 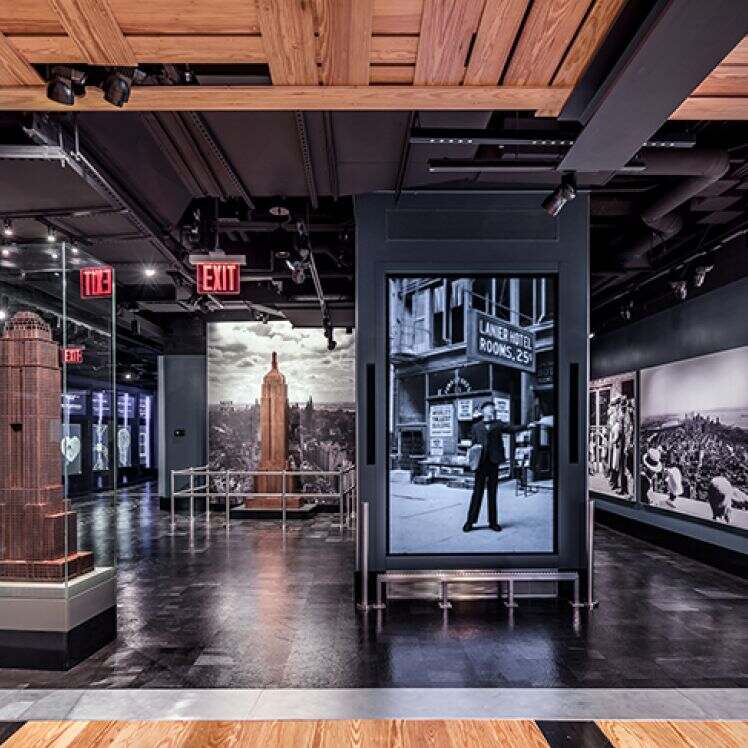 Bonus attraction: The Empire State Building tower lights! You don’t have to pay or enter the building to enjoy the lights, especially on a holiday.

The tower lights have been an important part of the city’s skyline for years and are one of the most iconic outdoor lighting fixtures in all of New York City. There are about 68,000 LED lights and they can be seen from miles away.

The building uses LEDs that can change colors to create a variety of effects such as day, night, rainbows, and more! The colors represent different holidays such as Independence Day, Halloween, Christmas, and New Year’s Eve. 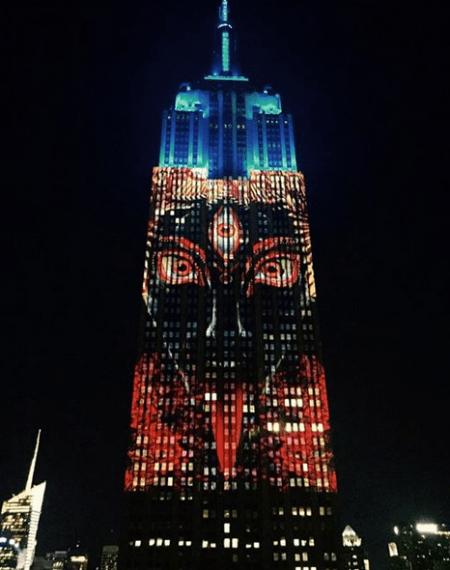 What’s below the deck: shops, restaurants, and office spaces of businesses. 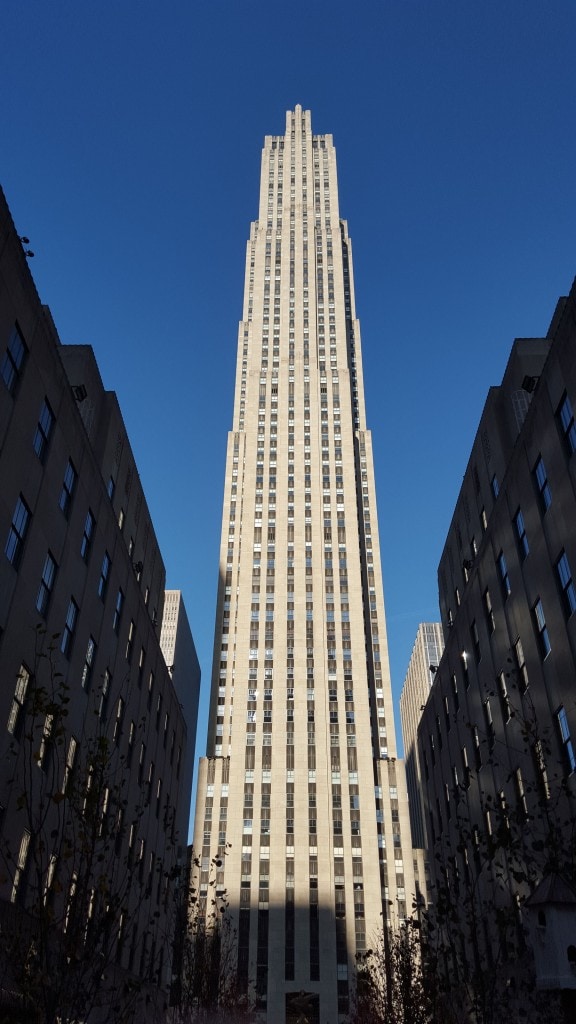 The Top of the Rock Observatory is a public observation deck at the top of Rockefeller Center. It is one of the most popular tourist attractions in New York City that offers a 360-degree panoramic view from the observatory.

There are two ways to get to the Top of the Rock. One on 50th Street, between 5th and 6th Avenues, next to Radio City Music Hall; and one through 30 Rockefeller Plaza. After, you’ll be required to go through a security check.

Top of the rock is a great spot for tourists and locals alike. The views are stunning and there are plenty of things to do around Rockefeller Center. You may see the amazing Rockefeller Center Tree when coming in winter.

It is a great place to visit in New York City, especially if you are looking for some entertainment and breathtaking views. You can get there by taking the subway or walking up from Rockefeller Plaza.

An intelligent light installation where your assigned color follows you all around the room. 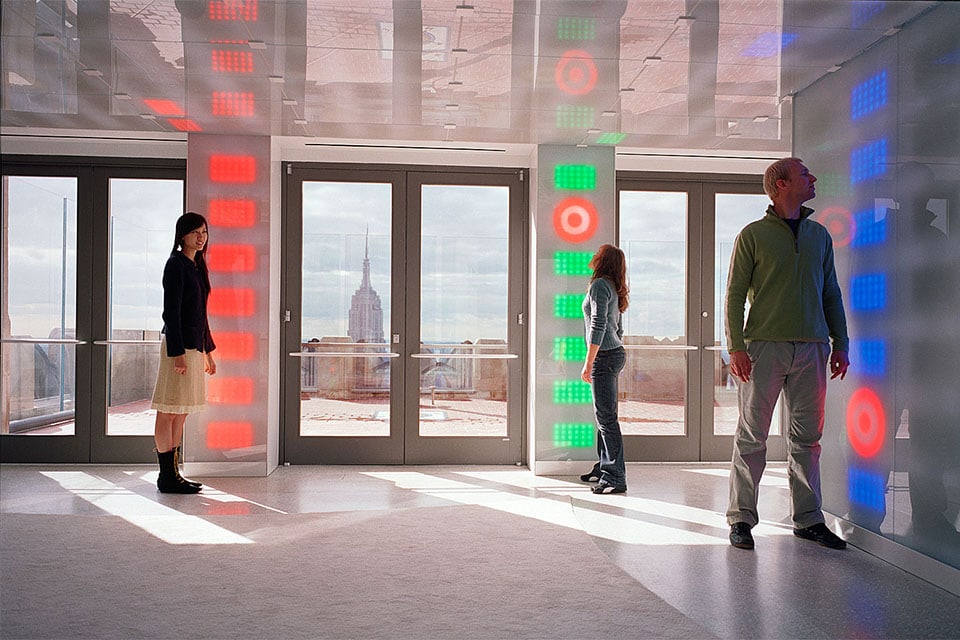 Walk up a winding staircase to get a view of the Joie chandelier – A huge chandelier made of 14000 crystals that span 3 stories. If you take a closer look, you’ll notice it’s shaped like the 30 Rockefeller Plaza upside down. 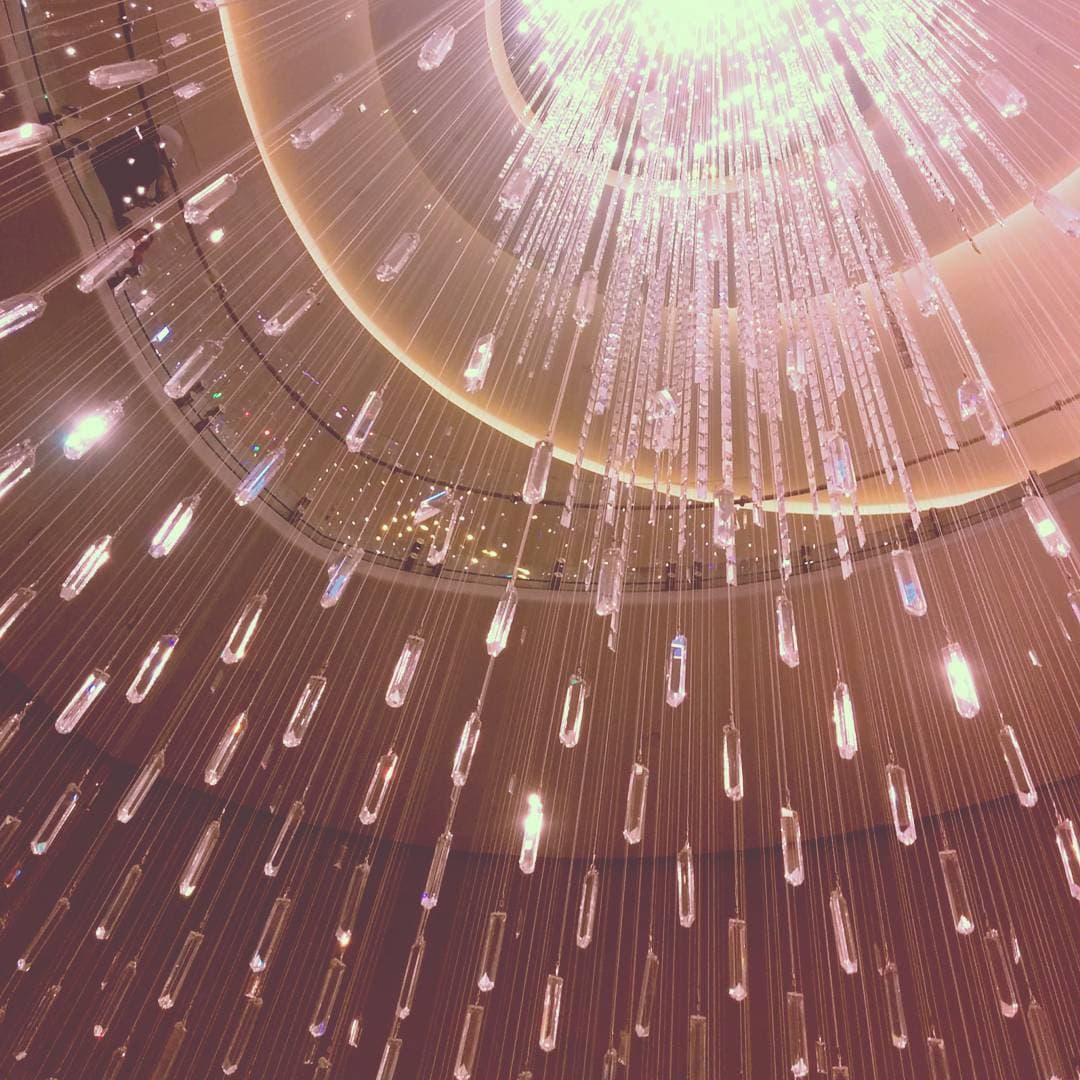 An exhibit displaying the history and creation of the Rockefeller Centre with pictures, artifacts, and a mini theatre. 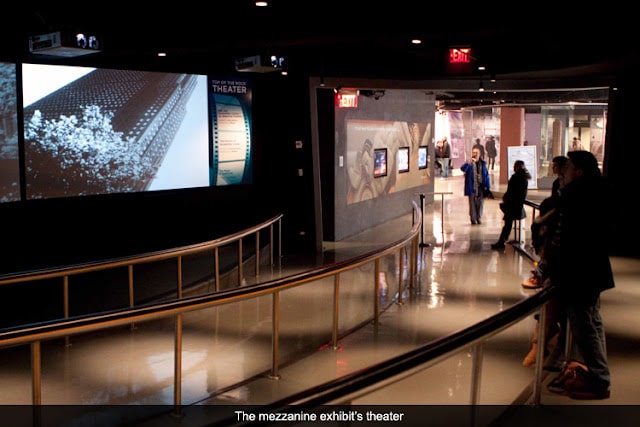 Features a replica beam of the one in the ‘Lunch Atop a Skyscraper’ photograph. The original photo was taken at that very spot and the exhibit allows you to create your version of the iconic photo. 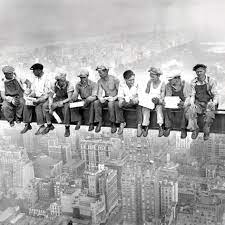 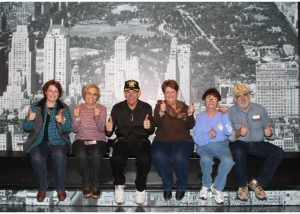 Features an elevator ride to the main decks with a glass ceiling taking you on a journey from the 1930s to the present day. 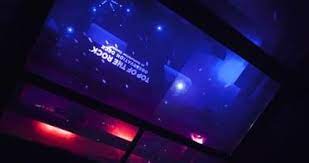 A crystal and glass-made art piece created by Swarovski. 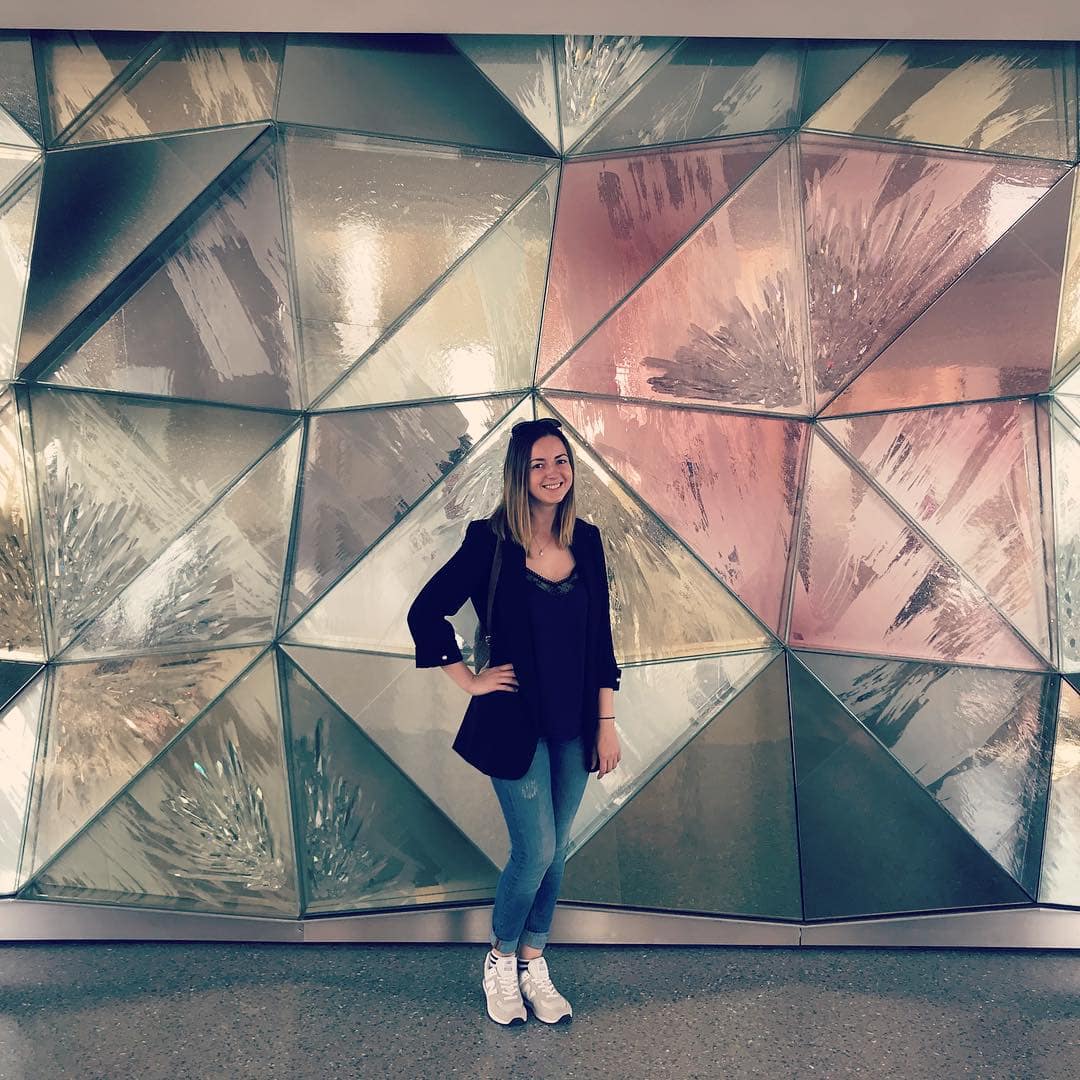 Rainbow Room: A bar/lounge on the 65th floor with a dance floor and outdoor terrace. 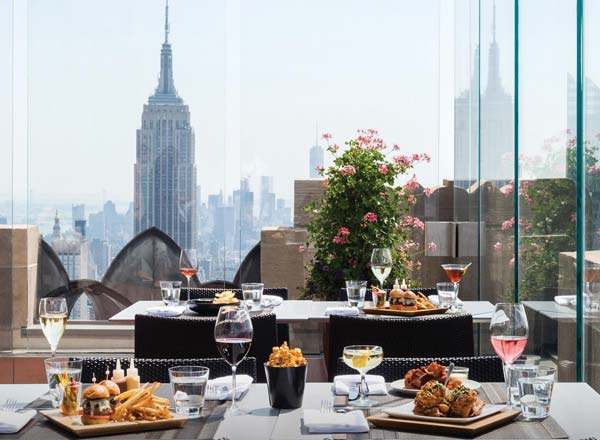 Best Time to Visit: At sunset.

Most thrilling Experience: Summit One Vanderbilt’s Levitation and Ascent.

Best deck if you have a fear of heights: Top of the rock (lowest observation deck).

Best deck if you’re looking for an iconic experience is: Empire State Building.

Where to go if you want to spend the whole day nearby: Top of the Rock. 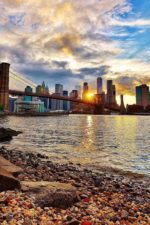 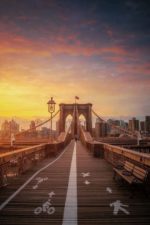